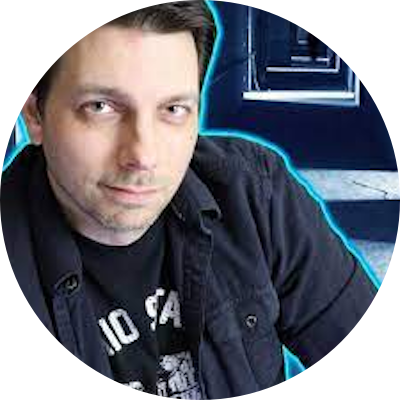 Mike Ricksecker is the author of A Walk In The Shadows: A Complete Guide To Shadow People, the historic paranormal books Ghosts of Maryland, Ghosts and Legends of Oklahoma, Campfire Tales: Midwest, Ghostorian Case Files, and the Encounters With The Paranormal series. He has appeared on multiple television shows and programs as a paranormal historian, including Animal Planet's The Haunted, Travel Channel's The Alaska Triangle, Bio Channel's My Ghost Story, and RenTV's (Russia) Mysteries of Mankind, Fox 5 News (Washington DC), Fox 25 News (Oklahoma City), ABC 3 News (Virginia Beach), Coast-to-Coast AM with George Noory, and he produces his own Internet shows Ghosts and Legends, Paranormal Roads, and Friday Night Ghost Frights. On Tuesday nights, he hosts The Edge of the Rabbit Hole Livestream Show and Beyond The Shadows on the Haunted Road Media YouTube channel. Haunted Road Media is also his own paranormal and supernatural book publishing and video production company representing a number of paranormal authors, winning the award for Excellent Media In The Paranormal Field at the 2019 Shockfest Film Festival.

Mike's historic paranormal articles have been published in The Baltimore Sun, Paranormal Underground Magazine, and he previously wrote an Oklahoma City paranormal column for Examiner.com (2010 - 2014). His work has also been featured in The Oklahoman, The Frederick News Post, Marshall University's The Parthenon, and Louisiana State University's Civil War Book Review.

Additionally, Mike is an Amazon best-selling mystery author with two entries to his Chase Michael DeBarlo private detective series, Deadly Heirs and System of the Dead. With nearly 30 years of involvement in the paranormal, Mike serves as a paranormal investigator and "Ghostorian" with Society of the Haunted and regularly travels to speak about supernatural phenomenon and writing.

A native of Cleveland, Ohio, Mike is a father of four and is an avid baseball fan.